Submergence, is an exploration of penetrable volumes of light, created using hundreds of strands of individually addressable LEDs, mapping volumetric 3D virtual architectures into a shared physical environment. At its most basic it is the humble LED cube, a regular volume of points of light.

The experiences are dialogues with spaces, responding to existing architectures and interior/exterior designs, adding to them, augmenting them with imaginary forces and presences, to cross boundaries between the physical and the digital, architecture and digital media, performance and installation, audience and performer.

I am motivated by a conflict.

The sense of belonging and the presence experienced at mass gatherings is one that has value, this relationship to the audience underpins my practice. While I am grateful to have had the opportunity to create immersive experiences and performances at grand scale, I am conflicted; the artist/audience relationship through mass media technologies feels so delineated, lacking intimacy and dialogue, an audience easily commodified and ignored.

What really underpins all this is a questioning of the medium/media of performance. Is there an in between media/form/technology, something that is both intimate and personal and grand in scale and reach.

I am seeking to examine the audience/artist relationship as a way of moving towards new expanded performances. Within the context of my own practice, I am considering what performances offer an audience and what conditions can we set to form new relationships between audience and performer.

What follows is a series of reflections that address my thinking throughout the Expanded Performance Industry fellowship. These are a poetic, disjointed response that seek to capture and combine observation of activity with my own emotional responses. 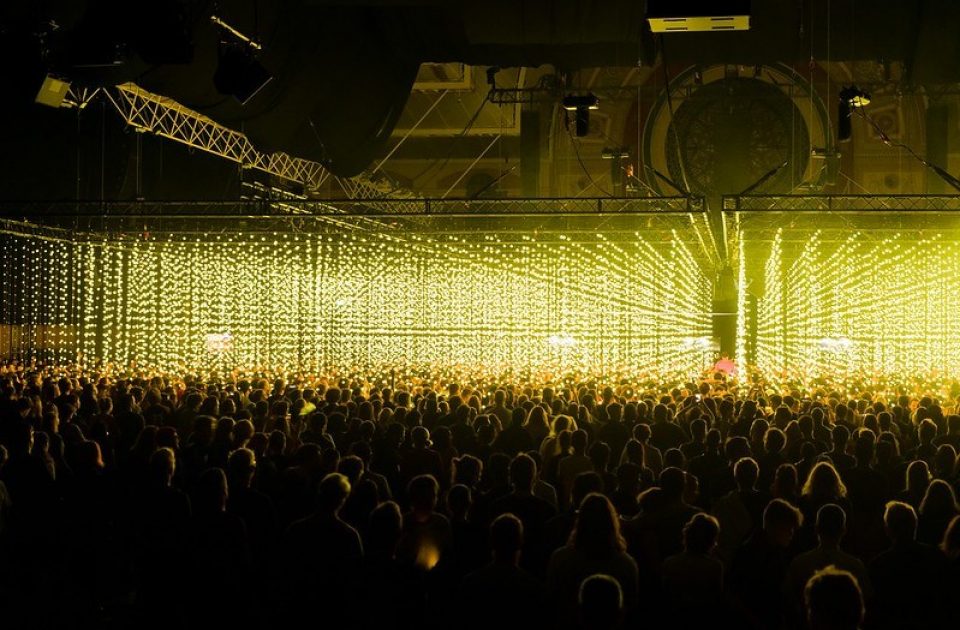 The audience have come to see Four Tet
They come ready for the experience Squidsoup will create
They come with preconception, knowledge, intention and expectation
They come open and ready to explore
They are a Four Tet audience
Familiar with abstraction and repetition
Familiar with the narrative and form of this electronic music
Our performance uses this expectation of musical structure and form
It is a performance within a volume of light

The light objects are abstract and consistent
Our performance, cued, immediate and in real-time
It is rehearsed yet experimental
Our software has evolved complexity and variability

We act together as musicians in a band, intuitive, cooptative, vying
But acting together, towards a common goal and with common intent
There is a sense of musical instrument
Almost a music sequencer tool set, performers joined
In rhythmic, blinking and timed event
A performance live and improvised
A performance, a response, an interpretation, an embroidery
An illustration of the relationship between artist and audience
A permeable three dimensional layer is thrown over the audience and performer
Volumes of light, explosions, waves and washes of colour are thrown into the layer
Momentarily recognisable forms in constant transition, degrading and merging
Events in real time, in the moment
A response to the Four Tet performance, an embroidering and illustration
A recognition of relationships and the actions and intention audience and performers 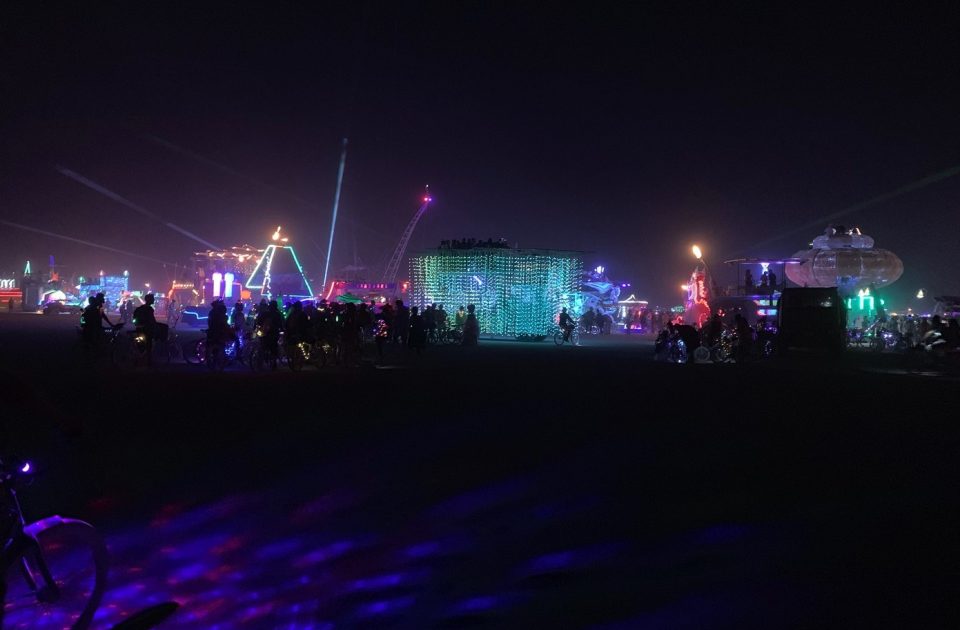 For the Four Tet performances the LED volume is static, the audience journeys to a performance space where the volume of light reinforces their relationship to the individual.

The transient moving Polaris Art Car at Burning man, took a volume of light and made it mobile. In motion across a desert the volume became more object amongst other objects. It remained a volume of light, shrouding a vehicle but no longer was fixed, it become a space that moves, that is active, yet still remaining part permeable.

The preparedness of an audience of Burning Man is of a different nature to Four Tet performances, they are not here to define their relationship to one individual, the musician, but rather to define their relationship to the event itself, to the spectacle, they arrive as performers, contributors. Like the Four Tet audience they are active, seeking and open but they are there to perform. 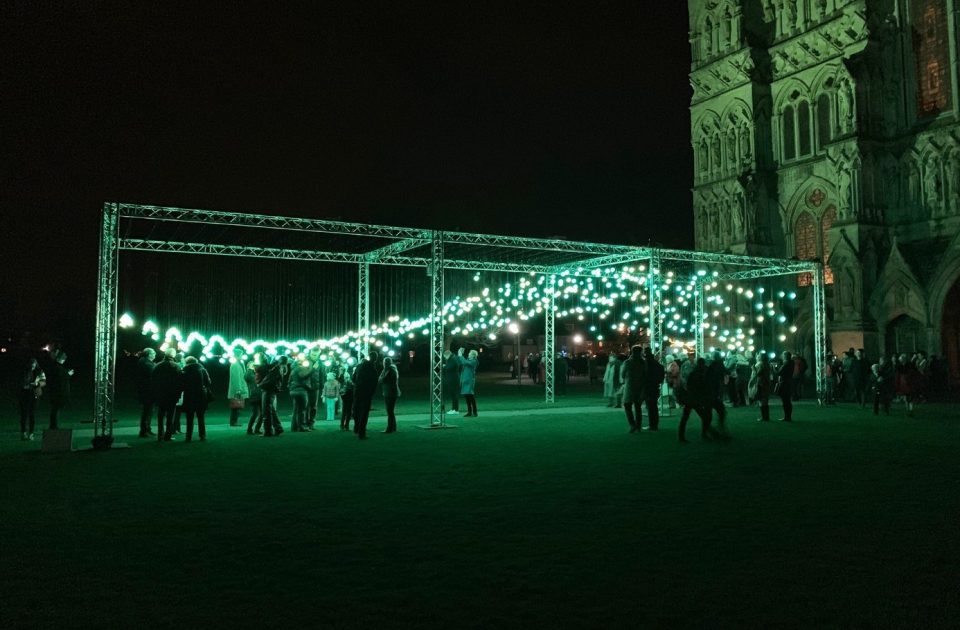 In Wave the points of light have lives of their own, communicating, thinking and responding for themselves. A murmuration of hundreds of individually controllable lights and sound moving through space. A parade of dispersed rhythms, the voice in motion.

Musical performance has a form, it has a texture, emergence, convergence and detachment, recognition. Multiple voices in a space it’s not about light but about the form of sound in space, recognition and contribution, it’s about picking up the baton, about making the choice to engage.

A reflection on the dynamism of Parades

What follows are two almost poems, both are attempts to express some of the qualities that appear to exist in New Orleans Jazz funerals

There is a journey to this space and place

Not measured in metres but in year of love, longing, pain, joy

They are coming for the event

They are coming to be connected, to belong

To be a team, to shared ideas, memories, tastes, smells, sounds

This is an active act of celebration, present, immersed

This is the performance of ownership and belonging

But this performance is not ridged or constrained

It is a performance of connection of intention

A loose and evolving melee of passionate memory

The distributed rhythms, a flock and flow, an always moving centre

A celebration and performance

A journey from the formal to the almost riotous protest

A procession from place of worship to place of rest

A performance shifting from formal to informal

A shifting direction, fluid, a flow

Control and leading not always clear

A journey from mourning and melancholia to exuberant celebration

A formal core, a first line

A blurring of the relationship between audience and parade, all theatre

A freer performance, free to perform, or not

Held as a whole by familiar songs, the standards

And the performance of grief and joy

A parades liveness appears to bring a sense of ownership as the physical parade travels through space, the relationships between mourners change, the musical dynamics change and evolve. It’s not always coherent, you have to work to make meaning, to build structure, to fill in the gaps, but there is space for the deceased, for elegy, as an act of binding. The performance is an act of ownership, of subject, of space and place, giving voice to an idea.

I have been trying to work out why the parade strikes such a chord with me as a form of performance, participation and creation. The touch point seems to be the ideas Squidsoup explored with Artworks Wave and Murmuration works that are not just about light and sound in space but about the relationship between message/media and its container/medium, the form/object as container, in a quite literal way - the medium as the message.

This thinking has bought me back to the notion of murmuration, thousands of birds flocking and flowing, with a shared intention, to land, all the time trying to maintain a relationship to the whole. Individual birds do not maintain an awareness of form of the murmuration but rather they have an individual rules set that hinges on maintaining a relationship to the other birds.

Ownership of the experience

Audience and performer, liveness and collaboration

A sort of summary, possible themes or qualities or questions.

A journey into a liminal space

Submergence is built on an idea that the form is consistent and pure, that as a space it is of an even consistency, density, granularity.

In its very name Wave takes on material properties, the object defines the nature and form of the sound. The wave is simultaneously form and feeling.

Why are you here what is your relationship to the performance? I belong to this and this belongs to me.

What makes a performance, how do you judge an audience, a funeral parade is a place of unique emotional pitch, cadence, it has a fever and form, a clear emotional state. It is readable, emotional expression is appropriate.

How is this experience owned by the audience, how are they in control?

Part of the notion of ownership is the notion of emergence, that things are continually trying to resolve, coming into being. This experience is not fixed as it emerges, I bind myself to it, I take ownership.

Songs offer an emotional structure an agreed rule set that on its outer edges is negotiated but that it is only in its performance that it is resolved, that’s its exact form is fixed.

The idea of a complete message rather than something that is completed by the audience.

The idea of the message in and of itself is problematic, message suggest completeness

Performance as an act of co-creation.

An audience in motion

I struggle with the concept of the static and passive audience, media technologies have increasingly pushed audiences to the static, to the inactive. The parade, the murmuration becomes a journey through space, bodies/voices in motion moving together in dispersed rhythm.

Jam/Liveness/Unrepeatability/You had to be there

Repeatability is the bedrock of commodification, repetition, allows packaging, the dissolution/thinning/multiplication of effort.

Repeatability allows the constant revaluing of a performance, its reuse and reapplication in new and unimagined contexts, the meaning is something else, something unknown unintended.

The loose performance, the way in which control of the musical structure and drive changes, it has a sense of theatre a passing of the baton, it is the performance of grief and also joy, it has flow, exactly who is in control is not always clear, multiple entities.

Liveness brings the sense of ownership; you have to work to make meaning.

A slice of hope and a side of humour